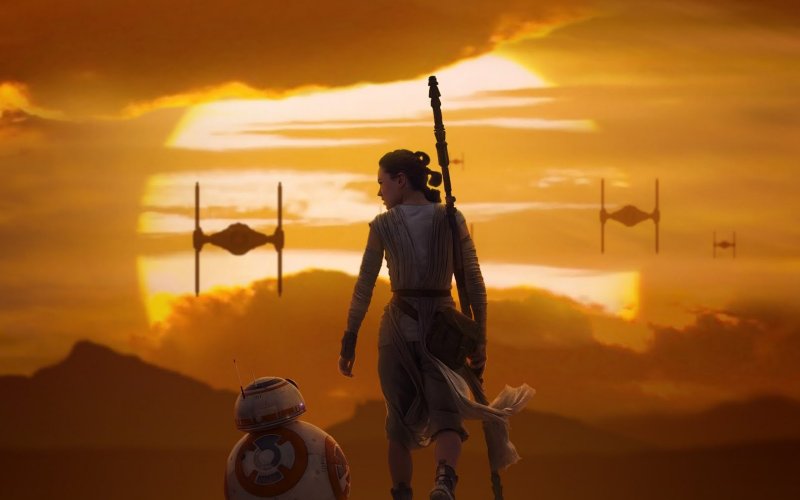 Ever since The Force Awakens released in December of 2015, the two big questions have been, “Who is Snoke?”  And “Where does Rey come from?”  Many people have theories, some are very reasonable.  I’ve come up with a theory that I think is believable that takes care of Snoke’s identity and Rey’s origins at the same time…

Rey Is A Bridger

In 2014, a cartoon that many people are familiar with called Star Wars Rebels aired for the very first time.  The main character, Ezra Bridger, is a young orphan boy.  You probably know his story if you have been keeping up with it.  Ezra is very strong with the force and ever since season one’s episode “Gathering Forces” he has been struggling with the Dark Side.  If Ezra is the father, then there is only one other character I could think to be the mother; Sabine Wren.  Now, yes, Sabine departed the show on last week’s episode, but that doesn’t mean that she can’t still possibly be Rey’s mom.  So let’s say Ezra and Sabine survive Rebels and get married and have Rey.  But what about that other thing that has left us wondering.  Why was Rey left on Jakku?  This leads me to the next part of my theory…

As Rey gets older, her parents notice that she is very strong with the force, so strong that Ezra has a hard time teaching her.  So when they hear that a Jedi Master by the name of Luke Skywalker has started a Jedi Academy, they put Rey in it.  Maybe in the academy Rey even had a friend named, oh, I don’t know, Ben Solo?  Meanwhile, (this is suggesting that Darth Maul still lives around this time)  Maul and Ezra are creating an army as well as a weapon to defend the Republic.  Maul may be helping, but he is secretly influencing Ezra to the Dark Side.  As Rey gets stronger in the light side, Ezra gets stronger in the dark.   Eventually, Ezra believes that the Republic had become what the Empire was and kills Maul, thinking that he does not need him anymore.  Ezra recruits Ben Solo, changes his name to Kylo Ren, and puts him in charge of his army.  Kanan (also suggesting that he lives) becomes aware of this and fights his former apprentice.  This results in Ezra getting a bad lightsaber cut on the head and Kanan dying.  Then, Ezra attacks the temple.  He remembers how powerful Rey is and wants her to join him too, but Sabine had taken her to Jakku to hide her from him.  Ezra fights Sabine and kills her before changing his name to Snoke and names his army, The Knights of Ren.

Clues That Support My Theory

– The timing, for one.  By the time of TFA, Ezra would be in his mid fifties.  Now, of course, we don’t know how old Snoke is, but this is a good guess.

– The book “Star Wars Propaganda” suggests that Sabine lives past Return of the Jedi.  The only thing is, I can’t say the same for Ezra.  We will have to wait for the end of Rebels to determine that.

– Obviously, TFA mirrors A New Hope.  If The Last Jedi is going to do the same, Snoke might really end up being her father.  In The Force Awakens, Rey is meant to mirror Luke.  Luke’s father turned to the Dark Side and his mother died.  So maybe Rey’s parents do the same?

– I am certain that at least one of Rey’s relatives drop her off on Jakku.  In the TFA novelization, it says that in Rey’s vision when she’s in the snowy forest that she hears a voice saying, “I’ll be back sweetheart, I promise.”  And, “I love you.”

Clues That Do Not Support My Theory

– The biggest problem with my theory is that Ezra might be too young to be Snoke.  In The Force Awakens novelization, Snoke says this…

“Kylo Ren, I watched the Empire rise, and then fall.  The gullible prattle on about the triumph of truth and justice, of individualism and free will.  As if such things were solid and real.  It was neither poor strategy nor arrogance that brought the Empire down.  Had lord Vader not succumbed to emotion at the crucial moment-had the father killed the son-the Empire would have prevailed.”

See there?  Snoke witnessed the rise and fall of the Empire.  Ezra was born the day that the Empire took over.  But I choose to still hold hope that Ezra might be Snoke.

– Another big issue is that the voice of Snoke, Andy Serkis, has said this about Snoke…

“He’s a new character in this universe; very much a newly-introduced character.  He’s aware of what’s gone on, in the respect that he has been around and is aware of prior events.  I think it would be fair to say that he is aware of the past to a great degree.”

So Snoke is a new character?  The chances are getting higher.

So there it is.  Now, this might be unlikely, but I guess we’ll just have to wait and see.  What do you think about this theory?