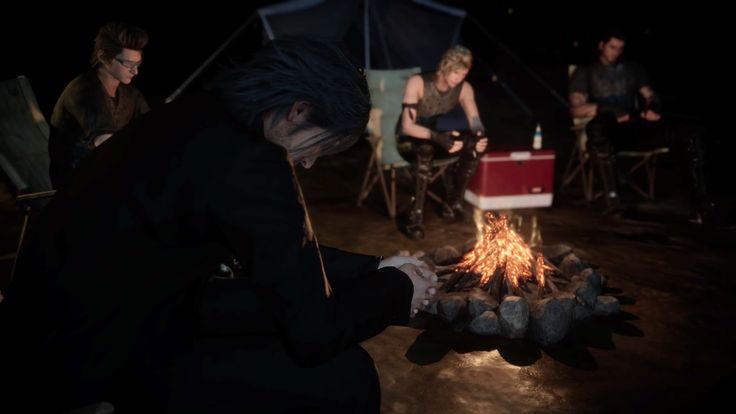 Hey guys! It’s time for another Life Lessons in Fiction, and as you can see by the title, we’re going to be taking a look at Final Fantasy 15. Ever since I first played the Pocket Edition of this game, I could see all the lessons that were in it. In fact, many of them have stuck with me to this day. I narrowed it down to these six to talk a little bit about. Take a look!

The first think that hits deep in this game is how short life is, and therefore how precious it is. Many characters lose their lives in this game, including main characters (well, mostly main characters). I know there are a lot of character deaths in all the Final Fantasy games, but somehow it hits different in FF15. This game made me realize how precious life can be, and at any moment something we love could be ripped away. At the beginning of the game, if Noctis knew he was never going to see his father again, would he have stopped to tell him goodbye? If he knew himself was going to die soon, would he have fought so much with his friends? There was so many instances like this in the game. We never know what the future holds, so we should spend the time we have loving each other and acknowledging our blessings.

2. You Decide Who You Become

Prompto’s subplot is perhaps the most tragic out of Noctis’ three friends (though Ignis’ really hits me int he feels, too). He finds out he was created in a laboratory- the same lab that is making all the enemy soldiers. So, technically, he is supposed to be Noctis’ enemy. He instantly believes Noctis and the others will reject him once the realize who he is. However, he is surprised when his friends reveal his origin makes no difference to them. What Prompto didn’t realize at first was that even though he was created to destroy, he was the one who decided his actions. He could choose between good and evil. So can we. No matter where we come from, our what life has made us into, we can choose whether we will bring destruction, or whether we’ll bring life. We can choose to do good.

No matter where Noctis went, or how difficult the journey got, his friends stuck with him. They were there for him whenever he needed them to be- even if he didn’t want them there. They had their moments, like their big fight after Luna’s death, but they eventually came back together to continue their journey home. Their friendship was one of the most important aspects in the game, and it shows in the soundtrack, too. The credits even had “Stand by Me” playing (the feels, y’all, the FEELS). What this game showed was how important it is to stick together in hard times. If Noctis had made this journey alone, he probably wouldn’t have made it. But together, they saved the world.

4. The Road To Fulfill Our Purpose Won’t Be Easy

We all have different purposes to fulfill in our lives. Noctis, as the Chosen King, was meant to sacrifice himself to bring light back to the world. Obviously this is a fictional story and a purpose none of us will have to fulfill (I mean, I hope not anyway, haha!), but the trials we face in fulfilling our purpose aren’t going to be easy, just like it wasn’t easy for Noctis and his friends. They faced numerous hardships, and had to give up many things that they loved. But the fact is, no matter what they faced, they kept going. Of course there were times they wanted to turn back. One of the saddest scenes is in Ignis’ DLC, where he tells Noctis he wants to give up and go home (since he had just found out what Noctis would have to do in order to save the world). They didn’t give up, but it showed that even these heroes had their moment of doubt when the trials got too difficult. When we are faced with hardship, we should never give up. Perhaps it only means we are getting closer and closer to fulfilling our God-given purpose!

5. Don’t Forget To Enjoy Yourself!

Though Final Fantasy 15 often felt like nothing good ever happened, there were a few fun times! For example, the guys went on fishing trips, chilled out at their camping spots or hotel room, etc. Life can be pretty stressful, and there are times where you just need to slow down and enjoy yourself! As the first lesson said, life is precious and too short to not make time to enjoy it. So no matter what you’re going through, set aside some time to have fun! Whether that means watching a TV show, eating a piece of cake, or going to the movies with friends, make sure to have a little fun in your life!

What do you think about these lessons? Do you have anymore you’d like to add from FF15 (if you played it)? Let me know in the comments below!

And as always, God bless y’all and have a wonderful week!

P.S. The cover image is literally the saddest scene in the game. Why did I pick it? Who the heck knows…

All media property of Square Enix.