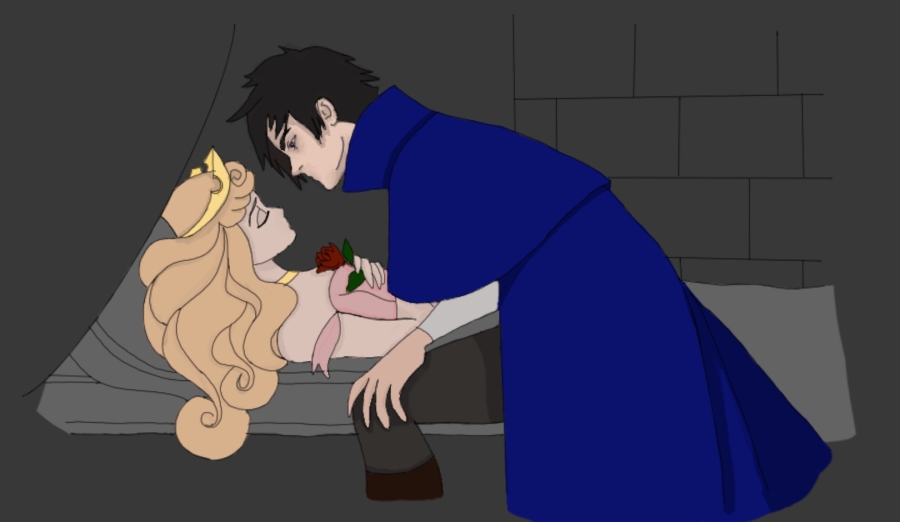 Janus trudged through the snow in the forest, barely noticing the cold. He had traveled far from the palace, and it was nearing evening now. Through the branches of the trees, he could make out the soft orange-pink glow of the sky, along with tiny dots of stars. It would be dark soon, and without a lantern, it would be hard to find his way.

The rage in him had quieted hours ago. Being in the silence of the snowy forest, it was hard to stay angry. The inky black coloring of his fingers had disappeared, and he figured his eyes might look normal as well. Now he was just tired. Tired and, if he was being honest, terribly upset with himself. Upset with King Hunter, and the fact that Emerald was being forced to marry him.

“This is what the fairies meant. Fate must be punishing me for going against it,” he mumbled to himself.

He walked until the sun went down, but he was still deep within the forest, and now in complete darkness. He stopped to squint into the shadows, but could see nothing. Just great, he though, huffing a sigh. He plopped down in the snow, hanging his head. “I asked for this. The fairies warned me, and I just had to be an idiot about it, as I usually am about things.” He leaned against the tree behind him and shut his eyes. Exhaustion flooded through him, and his stomach started growling from hunger. He tried to ignore it, and was soon fast asleep.

Sometime in the night, he awoke with a start, completely forgetting where he was, or how he got there. As the memories of the day before flooded back into his mind, he rubbed his face with a groan. It was still pitch black in the forest, but he thought he spotted a tiny light in the distance. A lantern? But who would be out this time of night? He rose, his boots crunching in the snow as he went to investigate.

When he got closer to the light, he realized it was not a lantern, but a tiny firefly. And as he stepped up to it, more appeared until he was surrounded by them. He watched them with wide eyes. What did this remind him of?

That’s right…that night, when he had run away from home and got lost in the woods. He had met Emerald, though he didn’t know she was a princess or anything. She was his first real friend. His only real friend. He clenched his hands into fists at his sides. Could he really stand by and let King Hunter marry Emerald? Let her be miserable for the rest of her life?

The rage from before came to him again. “I won’t let him!” he growled. The wedding would be the day after tomorrow. With the fireflies, he could travel well enough through the forest without getting too lost. At any rate, he should have enough time to get back to the palace before the wedding to stop it from happening.

So he turned back the way he came, breaking into a run.

He reached the palace grounds by the next evening. The wedding would be the next morning, unless he had anything to say about it. Which, he did, of course. His body was exhausted from all the walking, and his stomach was growling, but he could barely think about stopping to rest. He had to see Emerald right away and tell her how he really felt.

However, as soon as he started up towards the palace, two Knights of Dusk stopped him with spears. “Where do you think you’re going, Janus?” one of them asked. His smirk was the only thing visible since his helmet covered his other features.

Janus frowned. “Going to see the Princess, sir,” he said. “I am her Guard, and I’ve been neglecting my duty.”

“You aren’t her Guard anymore,” the second knight said. Janus wanted to smack the satisfied smile right off his face, but forced himself to stay still. “We have orders from King Hunter. He said that if you came around, we were to kick you right back outta here.”

Janus’ hands clenched into fists at his sides, and he felt the rage bubbling up in him again. “Do it, then.” He pushed past them, but was only rewards with being slammed in the back with the butt of a spear. It knocked the air out of him, though he managed to keep his balance. He whirled around, but while one grabbed him in an iron-like grasp, the second held the tip of his spear to his throat.

“All right,” the knight who was grabbing him said. “His Majesty also said that if you fought, which he supposed you would, then we were to take you straight to the dungeon.”

Janus struggled in his grasp, and nearly broke out. But the next thing he knew, they rammed the butt of one of the spears at his head, and everything went black.

We are soon coming to the end, I believe, unless something comes up that makes this story longer. But hey, if that happened, I’ll say that the end of the story would probably benefit from that. You’ll see what I mean when we get there! Anyways, I’m having a lot of fun writing Janus this way, and I can’t wait to share the next few parts with you guys!

Let me know your thoughts in the comments below! And as always, God bless y’all and have a wonderful weekend!