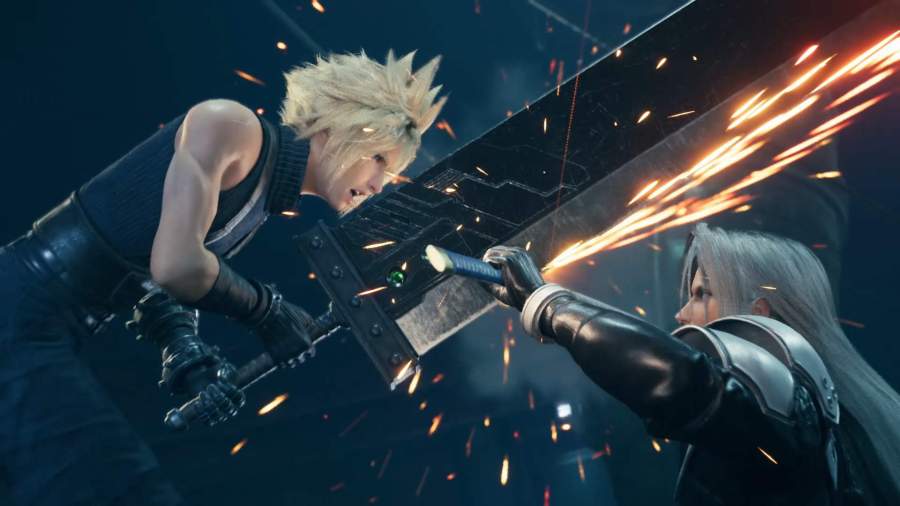 Hey guys!  I am so, so excited, because the Final Fantasy 7 hype is real!  I beat the remake a few weeks ago and just, wow.  I was rendered completely speechless.  There is SO much to talk about, and I have divided the discussion into a spoiler free section and a spoiler filled sections so that everyone can get a taste of this review.  Let’s get into this with the hope that I don’t go off on a rant!

Where do I even start?  This game is beautiful, detailed, and emotional.  And it;s by far the most nostalgic thing that I have ever played in my entire life, and I’ve played a lot of games.  The music had me stopping to listen.  I really liked the addition of the soundtrack disks you can collect for the jukebox and how each song was rewritten to be Jazz.  I had lots of fun collecting those!

With my sister replaying the original, I got to see just how detailed the remake is.  Some lines are word for word.  Some scenes are the exact same, down to the paint color on the walls.  I am blown away at everything Square Enix put into this game and I can see why it took so long to release it.  They wanted this game to be perfect.  Yes, it has it’s flaws, but it is a gorgeous game none the less.

The story is mostly the same, with a few minor changes at first, and then developing into something really different by the end! The Final Fantasy 7 Remake introduced The Whispers, which, I have to say, are an interesting touch, though I don’t completely understand what their motives are.  Their jobs are to keep everyone on destiny’s path, but as for why, I don’t know.  Some people say it could be Sephiroth’s doing, some people think it might be Aerith’s fault.  I will get more into that in my spoiler section.

The characters are all still the same FF7 characters that we know and love, with a few tweaks to some of them.  I think it’s safe to say that Aerith and Cloud got the majority of those tweaks.  Cloud is a lot more quiet, and they really focused a lot more on how mentally damaged he is in the remake.  Aerith knows a lot more than she did back in the original.  While she never knew she was an Ancient in the original, she seems to know all about it here, and even appears to have abilities she never had in the original. And the same can be said for Sephiroth, because there is certainly something going on with him.

I had a really great time playing this remake, and I may or may not have gotten to chapter eight in one night… I really like all the stuff they added and there were so many scenes that I was so happy to see again!  The battles were fun, except for that one house battle because that was really hard and took a long time!  My favorite battle by far was the final boss!

I was really, really excited for a lot of the scenes, especially for the part where you follow the trail of blood up to the top floor of the Shinra Tower, as well as meeting Rufus for the first time since he is a favorite character of mine! In this part, you have the chance to get a secret scene with either Barret, Tifa, or Aerith…well, I got Barret…haha.  Still, it was a very interesting scene, and I will use the game’s chapter selection to be able to see the other secret scenes as well.

That was an addition that I really enjoy, that you can go to whatever chapter you want, finish the activities there, and go to a different chapter to see a scene you might not have gotten the first time around.  I used this to see the squad climb up all those flights of stairs, since I took the elevator the first time around.

One more thing before the Spoiler Section, I want to encourage those who have not played the original to PLEASE PLAY IT!  You will not be disappointed, and it will give you something to do while waiting for the next part of the Remake!

Ok, now I can talk freely!  Can I start off by saying, WHAT WAS THAT??? I am incredibly confused, and happy, and just…everything.  What was that ending?  I literally sat there bug eyed staring at the screen and waiting for it to say, KIDDING!!  I am not sure what to make of it, and I’ll do my best to talk about it.

First off, about Aerith and Sephiroth.  Something is up.  I feel like they know more than they should.  As I said before, this game introduced us the the Whispers, who’s job is to keep the characters on Destiny’s path.  They seem to be really interested in Aerith, and follow her around an awful lot.  Some theories say this is because this might be a totally different Aerith, one that, perhaps, has been reborn from the Lifestream after her death in the original.  And after that ending, everyone is asking the same question:

Can we save Aerith?

It’s what everyone has been trying to do for the last twenty three years.  People have worked SO HARD to change the fate of this beloved FF character through mods and anything else they could think of, and there have even been some ridiculous theories out there.  But if this is indeed Aerith reborn, then could she know what is to come?

But if this is Aerith reborn, then how is she somehow going through the same story all over again?  It’s simple…or not.  As the theory goes, Sephiroth might have turned back time, another reason the Whispers might have appeared.  Because, like Aerith, Sephiroth knows things.

His chilling line, “You have seven seconds”, could change a lot.  It is a warning to Cloud, but for what?  One person pointed out that it took seven seconds for Sephiroth to fall out of the sky and kill Aerith.  Sephiroth could literally warning Cloud about Aerith’s death.  But the question is if Cloud will understand before it’s too late.

And besides time traveling, we have bigger things to worry about, because some people who should be dead are up and walking around, for the most part.

We have ALTERNATE REALITIES!

Near the end of the game, the squad talks about straying from destiny’s path, and they step through a portal that could have been the thing that changes the entire course of this game, and it made me realize that this isn’t a remake.  This is a reboot, and Square Enix is going for something new.

After the final boss battle with Sephiroth, I was completely shocked!  It cuts to a new scene, staring none other than Zack Fair.

He shouldn’t have been alive that morning.  I watched Zack Fair die at the end of Crisis Core.  It is literally one of the most traumatizing scenes FF has to offer.  But here he was, alive! And in this scene, a large explosion happens, which could very well be the destruction of the Whisper Harbinger.  And guess what?  Meanwhile people are starting to clean up the disaster area that is Sector 7 and we find that Zack Fair is not the only one who cheated their original death.

I give you Biggs, back to the land of the living.  Cue shocked faces.  Cue screaming.

I mean, yeah, Wedge survived the plate falling, which was also a surprise, but near the end his fate is left as a mystery when the Whispers got to him.

But BIGGS?? I still don’t know how to feel about this.

But then the very end!  As the squad leaves Midgar, Zack Fair himself, lugging a Mako poisoned Cloud walks by, and he passes Aerith.  Zack was SO CLOSE to Midgar!  He didn’t get that far in Crisis Core!  Somehow, by passing through that portal and destroying that Whisper Harbinger earlier in the game, the squad cause big things to happen.

Later on, the makers revealed that yes, Zack Fair is a alive.  There is one teeny tiny detail though, and that is Stamp.

Throughout the game, we see graffiti all over the place of Stamp, a cartoon dog used for propaganda.  In this alternate scene with Zack an image of Stamp is seen…but it’s not the same breed of dog, furthering that this is indeed an alternate reality.

I have SO MANY questions. Everyone has so many questions, and there’s one thing that we can be certain of, and that is we won’t know much until the release of the next part.  The makers have said that they would like to release the game in smaller parts so that it won’t take so long to get to us this time around. It has also been confirmed that part two is already in the works.  But until then, we’ll have to wait as patiently as possible.

Did you play the Final Fantasy 7 Remake?  Have any thoughts?  Let me know in the comments below, as well as any theories you’d like me to discuss in a future post!