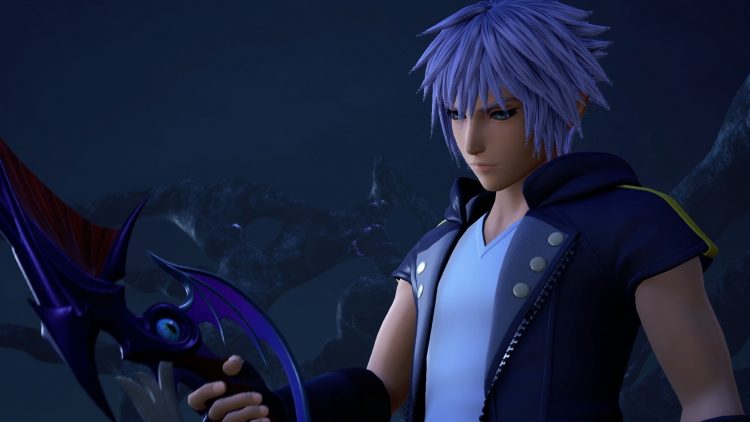 Riku is Sora and Kairi’s best friend, and he grew up on Destiny Islands.  We first meet Riku in the original Kingdom Hearts, which released back in 2002.  I don’t know about you, but it actually took me awhile to like Riku.  I actually beat Kingdom Hearts last year, and I can remember being like, “Oh, come on Riku!”  or, “Oh Riku, don’t do that!!”  Every time he’d do something bad.  By the end of this game, he had done some pretty terrible things.  He gave everything he was over to the darkness and became Ansem (Xehanort’s heartless), and he even fought Sora.  But at the very end, he closed himself up in the Realm of Darkness.  (Also, in Birth by Sleep we got to see that Riku, not Sora, was the keyblade’s chosen wielder, since Terra performed the bequeathing ceremony on him when he was like, five.  Sine Riku fell to the darkness, Sora was next in line for the keyblade.)

Next time we see him is in Chain of Memories, where he travels higher and higher through Castle Oblivion.  This time, he’s trying to control the darkness in his heart.  At the end of this game, he is given a choice; keep his darkness; which meant that at any time Ansem could take over him, or give up the darkness; which meant he would lose his memories.  He chose to keep his darkness, sure that he could control it.

In Kingdom Hearts 358/2 Days, he is struggling with difficult tasks.  Sora has been asleep for a year now, and that worlds need him back.  In order for him to wake up, Riku must get rid everyone directly linked to him; Roxas and Xion have to go.  Riku fights Roxas (who had already been forced to kill Xion), and wins after allowing the darkness to take over.  (One thing I will get to in a moment is the fact that Riku had worn a blindfold and an Organization XIII coat while Sora was sleeping).  Because he let the darkness take him again, he took the form of Ansem once more.

In Kingdom Hearts II he is still looking like Ansem, and had made King Mickey swear to never tell Sora what he had done in order to wake him up.  Of course, the secret gets out and Sora is pretty upset.  Eventually, Riku is able to turn back to his original form, but darkness is still in his heart.

In Dream Drop Distance, Riku is able to pass the Mark of Mastery while Sora, who had been driven into the depths of the darkness, did not.  In fact, when Sora was on the brink of being trapped within the darkness forever, Riku did everything he could to save him.  By now, Riku had accepted his darkness, and he became a more powerful and wise person because of it.

In Kingdom Hearts III, Riku is now eighteen and rocking the darkness in his heart.  I’d like to say that he’s got somewhat of an immunity to darkness, since it doesn’t bother him much anymore.  He got himself a new keyblade, and along with it a new sense of purpose.  He’s now a Keyblade Master and a Guardian of Light, which is pretty awesome!  Alongside King Mickey and Sora, he was able to bring Aqua, who had been trapped in the Realm of Darkness for the last ten years, back to the light.  Not only that, but he participated in the history changing event of stopping the second Keyblade War from taking place. 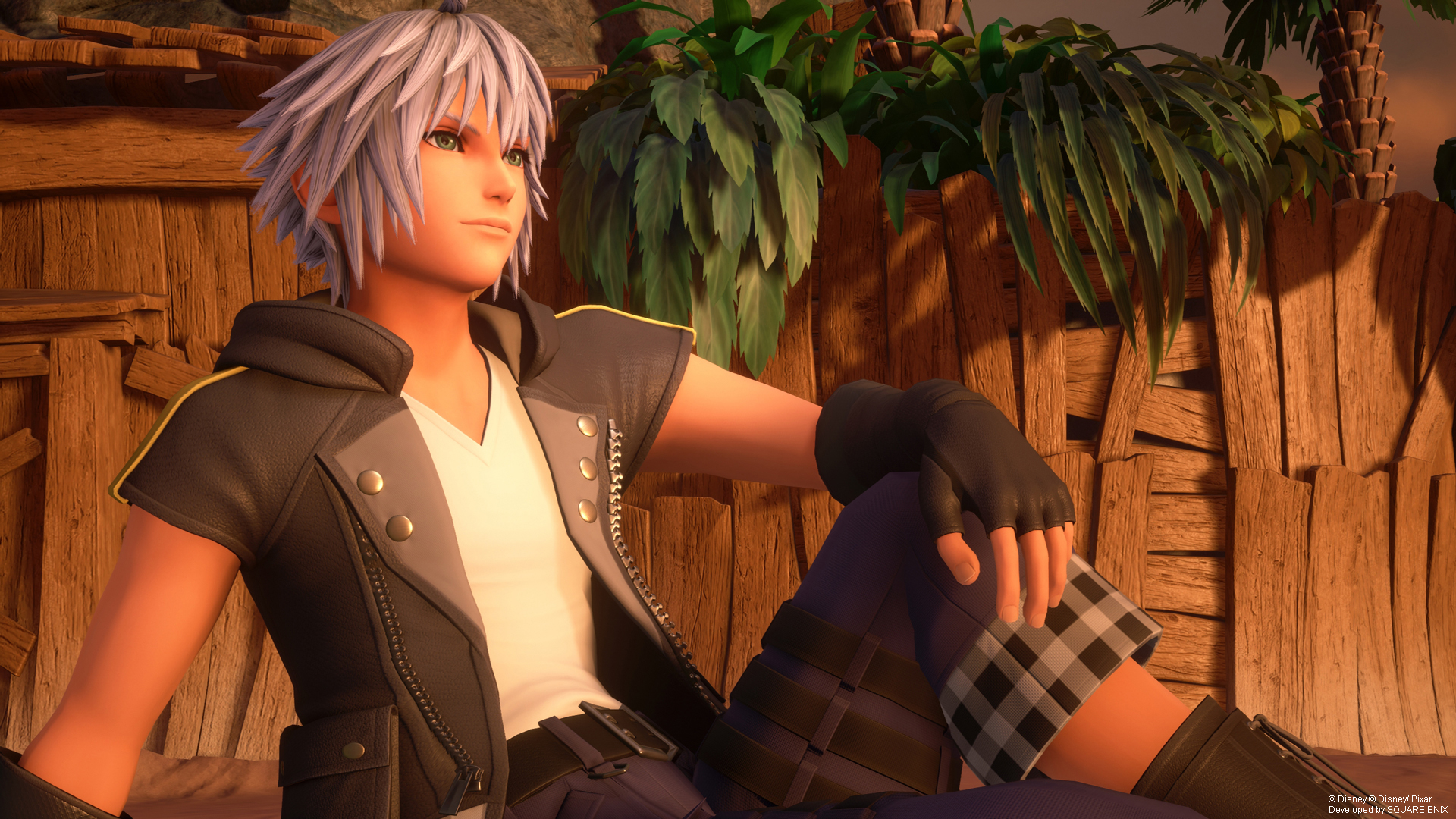 What Makes Riku So Inspiring?

Riku went through a very dark time in his life, and because of that, he is now a lot wiser and stronger.  I really loved the arc where Riku chose to wear a blindfold.  He wore the Organization 13 coat to stop the darkness from completely taking over, but I was never sure why he wore the blindfold.  Yet, I have some thoughts.  The biggest reason is most likely because he was holding his darkness back, but I often think that he wore one so that he didn’t have to see the bad things he was doing.  He was having to do terrible things in order for Sora to wake up, but the world needed him, so someone had to do it.  Riku was utterly ready to do whatever it took to get him back, even if it meant changing himself.  What if that meant he would never get his old self back?  He did it anyway.  Riku was always ready to do whatever it took to keep his friends safe.

Riku’s story is inspiring to me because I believe that it holds a huge lesson for everyone. Dark times are going to come in our lives; that is a true fact.  But it doesn’t have to destroy us.  We don’t have to give in.  When we push through and make it to the other side, we’re going to be stronger and wiser, and Riku showed us that it is possible.  He did not let the darkness and fear hold him back.  Because of his efforts, he accomplished everything I never would imagined him doing when I played the first Kingdom Hearts.  It was great to see him fighting on the side of the light in Kingdom Hearts III, and I can’t wait to see what’s next for Riku!

Oh, what to choose, what to choose?!  Riku has a lot of great moments, but I think for now I’ll settle on the moment he tells DiZ that he “walks the road to dawn”.  It’s a very defining moment for him, since here he chose not to fear the dark anymore.  However, I am a big fan of his battle with Roxas, as well as a few scenes in Dream Drop Distance!

Some Fast Facts About Riku

– In Birth by Sleep, Riku appears as a five year old (and is totally adorable!).  In the original Kingdom Hearts, he is fifteen, then in Dream Drop Distance he is sixteen.  Finally, by the time of Kingdom Hearts III, he is eighteen years old.

–  Supposedly, Riku broke his wrist during his fight with Roxas, and it never healed correctly.  This is why he wears a bandage looking thing on it.  At the end of Kingdom Hearts II (I think in Dream Drop Distance as well), you might notice that when he walks he keeps this hand from moving, and almost never uses it.  While it has never been confirmed that he actually broke his wrist, it is a well known theory within the Kingdom Hearts fandom.

– As of the events of Kingdom Hearts III, Riku, along with King Mickey, is the only keyblade wielder who possess the Power of Waking, which is the power to awaken sleeping hearts.

– Riku received the power to wield a keyblade from Terra when he was five years old.

– One of my favorite moments in 358/2 Days is when Riku removes his blindfold to look at Xion, and is shocked at what he sees.  While it never shows in the game who he actually sees in her, it is shown in the manga comics that he sees Kairi.

– Riku’s theme is by far one of the greatest themes in the game, in my opinion.  By just hearing it, you can tell his story is one full of struggles.

Riku is someone who really stood out to a lot of Kingdom Hearts fans, and it’s clear that he is well loved.  I hope he inspires you as much as he inspires me!  What do you think about Riku, and what is your favorite Riku moment?  Start up the conversation in the comments below!