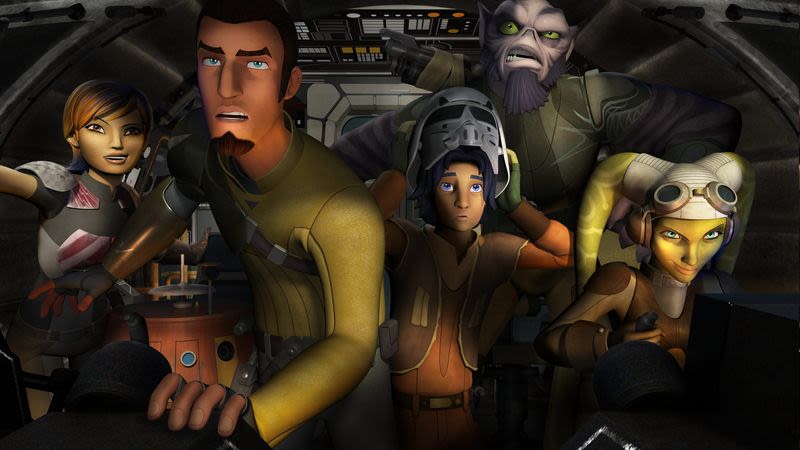 Last week we saw the end of an amazing TV series.  Star Wars Rebels was one of the greatest shows that I’ve ever watched, and I’m sad to see it go.  Star Wars Rebels came a long way since season one, and there’s some things I want to talk about.  (Major Spoiler Warnings!)…

First of all, I want to admit something.  I hated Star Wars Rebels.  I remember it like it was yesterday.  “Spark of Rebellion” aired, I watched half of it and was not impressed.  By the way, around this time I was finishing up the Clone Wars TV series, which I adored, so that might have something to do with it.  Anyway, I was caught a 10:00 p.m. showing of “Droids in Distress”, and only then did I get a little interested.  Finally, I got myself to watch the first episode again, and, surprise!  I found that Star Wars Rebels wasn’t all that bad!  Of course, it wasn’t great either.  I love season one, but it isn’t the best season.  Especially not the best to start with.  It’s childish, goofy, and barely any action happened until the finale.  Whenever I talk to someone who watched the Clone Wars, I always ask, “What about Star Wars Rebels?”  They always saw the same thing;  “It’s no good!”  That’s because you’re still on season one!  If you can get to the end of that you’ll find it’s great! So yeah, none of my friends watch Star Wars Rebels.  One thing that really caught my attention in this show is the use of characters such as Yoda and Grand Moff Tarkin.  But then the finale happened, and two huge characters came in.  The return of Ahsoka Tano made me very, VERY happy!  And then once Darth Vader came in too, I knew the inevitable was about to happen; Darth Vader vs. Ahsoka.  Oh, how I love Master against apprentice battles!  One thing I’ll never forget about the season one finale was how long i waited.  Let me tell you, that Monday was one of the longest days of my life!  It was definitely worth the wait!

Season two came along, and brought three of my favorite clones in.  When I watched the trailer for season two, I screamed and jumped around when I heard Rex’s voice!  And Hondo!  My favorite space pirate!  Season two was a little darker than season one, so I new it was getting better.  I got attached to all the characters, Hera and Kanan being my favorites.  In some ways, the Ghost crew kind of acts like my own family, so I relate to them a lot.  Season two’s finale, “Twilight of the Apprentice”, blew me away.  Darth Maul made his triumphant return, Ezra fell closer to the Dark Side, and we could never forget Ahsoka’s lightaber battle with Darth Vader.  Also, because of Darth Maul, Kanan lost his sight and was forced (see what I did there?) to learn how to “see” a different way.  I’ll get more on that in a minute.  Ahsoka and Darth Vader’s battle was so emotional, but I realized only those who watched the Clone Wars would understand why it was emotional.  The moment Darth Vader looks at Ahsoka with his broken mask, revealing that he really is Anakin Skywalker, gets me every single time.  But then started the mystery of Ahsoka’s fate…

Season three is probably my favorite.  It was so much darker than the previous seasons. And we can’t forget about Grand Admiral Thrawn’s arrival to the show.  Thrawn is a beloved character first introduced in Timothy Zahn’s Thrawn Trilogy.  When the Expanded Universe was thrown away, people were devastated.  Thanks to Star Wars Rebels, a lot of Expanded Universe characters have managed to come back.  I can not tell you how happy I was to have Thrawn back!  I remember going back to watch a replay of the Star Wars Rebels season three panel at the 2016 Star Wars Celebration after I first watched the trailer.  The crowd was screaming so loud when they saw Thrawn you couldn’t here the trailer anymore!  That’s one of my favorite Star Wars memories!  The Ghost crew went through a lot in this season.  Ezra had a lot of character growth, but he was still close to the Dark Side.  At the beginning of season three, we find that Kanan has been sitting out of the Rebellion having been blinded.  This helped Ezra to drift towards the Dark Side.  Thanks to the mysterious Bendu, Kanan learns to “see” through the force and is there when Ezra needs him most.  But I think the character with the most development in season three was Sabine.  We learned that Sabine had helped to build weapons for the Empire, one of them was revealed in season four.  Sabine was able to find the Dark Saber and was trained by Kanan.  “Trials of the Darksaber” is a beautiful episode!  We really got a grasp on Sabine’s past and just how broken she really was.  The season also brought an end to one of my favorite Star Wars villains.  A highly anticipated moment was Maul and Obi-Wan-Kenobi’s rematch.  This time, Kenobi is a whole lot wiser and is able to take Maul out in a matter of seconds.  As Maul dies, he finds that Luke Skywalker is indeed the Chosen One.  I’ll never forget his final words to Kenobi; “He will…avenge us.”  Maul might have changed, but could never get enough revenge.  Moving onto the finale, I want to say that the Bendu is a truly remarkable character.  He literally turned into a lightning storm to get the Empire and Phoenix Squadron off of his planet!  But it’s the end of “Zero Hour” that gets me.  The Bendu’s conversation with Grand Admiral Thrawn gives me the chills:

Thrawn: “What manner of a creature are you?”

Bendu: “One beyond your power to destroy.”

Thrawn: “It would not seem so.”

Bendu: “You cannot see…but I can.”

Bendu: “I see your defeat…like many arms surrounding you in a cold embrace.”

Little did we know, the Bendu’s vision was about to come true.

Star Wars Rebels’ final season was a roller-coaster of non-stop action.  Sabine’s story got wrapped up, revealing a terrible weapon that she designed.  Luckily, she was able to destroy the prototype of this weapon.  Lothal’s story grew more mysterious with each episode.  We got introduced to the Loth-wolves, which are my new favorite Star Wars creatures!  Season four never failed to have me on the edge of my seat!  The most heartbreaking moment in all of Star Wars Rebels happened in this season.  Kanan’s death left a mark on me.  I saw Kanan’s death coming from a mile away, but I was still unprepared for it when it came.  The Ghost crew’s reaction to the death was so emotional.  I’ve never encountered anything like it in an animated TV show before.  Season four also brought something to us that we have never seen happen in Star Wars before.  The episode “A World Between Worlds” blew my mind!  Ezra literally had control over the galaxy’s space and time!  Not only was Ahsoka’s fate revealed, but the Clone Wars’ Mortis family was referenced a whole lot.  I was loosing my mind the entire time!  Now, nothing could have prepared me for Star Wars Rebels’ grand finale.  Ezra took Kanan’s “one last lesson” to heart and sacrificed himself for his friends and his homeworld.  He is able to overcome the Emperor’s temptation of a life where his parents are still alive.  This scene never fails to make me cry!  Ezra’s conversation with his parents breaks my heart:

Ephraim and Mira: “We love you, Ezra.”

Makes me cry, every.  Single.  Time.  Anyway, Ezra and Thrawn are out in the galaxy somewhere, and hopefully, we will be told where someday.  The very end of Star Wars Rebels brought a few surprises.  The Ghost crew ends up surviving past “Return of the Jedi” (except Kanan).  Zeb and Kallus went to live with the Lasat people, Hera ended up having a son, Jacen Syndulla, and Sabine went off with Ahsoka to find Ezra.  I really, really hope that the next animated series is about those two searching for the lost Jedi!

Star Wars Rebels is a show that has given me many great memories.  This show made me laugh until I can’t breathe anymore and cry like a baby!  Hera actually inspired me to learn how to fly a plane, so I’ll fly someday too!  In fact, this blog probably wouldn’t have existed if Rebels was never made.  I have loved writing every Star Wars Rebels review and I will continue to write things on this show.  Someday, another animated series will release.  Hopefully it continues Star Wars Rebels’ story!  Now tell me, what does Star Wars Rebels mean to you?  Which Ghost crew member is your favorite and why?  Let me know in the comments below!