Happy Valentine’s Day Star Wars fans!  Love is in the air and there is chocolate and flowers all over the place!  And what Star Wars related things do I have to talk about on Valentine’s Day?  Alongside all those lightsaber battles, devastating deaths, and mysterious story lines, Star Wars also has romance.  It’s in the movies, The Clone Wars, and has recently made it’s way into Star Wars Rebels!  For today, I want to point out a few of my favorite love stories from Star Wars, whether their canon or not.  So grab some chocolate and let’s get to it!

We obviously have to start with the smuggler and the the princess!  They were Star Wars’ first love story!  Who would have thought such a pair would ever marry?  Han Solo was cocky and witty, Leia was ??????? Who would have thought those two would get married?  Yes, I know their relationship wasn’t very stable, and they ended up becoming distant from each other after their son, Ben Solo, turned to the Dark Side.  But there is no doubt that they really loved each other.  After all, one of Star Wars’ most famous quote comes from them!

Han and Leia first met all the way back in A New Hope on the Death Star.  Han Solo was going to take Luke Skywalker and Obi-Wan-Kenobi to Alderaan, but they found it destroyed and soon found themselves on the Death Star in a daring attempt to rescue a princess; Leia Organa. Of course, Han was only in it for the money, but by the end of the movie he not only became a rebel hero, but he found that he actually liked Leia.  In The Empire Strikes Back, their relationship grew, and thus the famous line was born.  As Han is used as a test subject for carbon-freezing.  Leia finally reveals her feelings for the smuggler with, “I love you.”  Han replies with, “I know.”  Oh yeah, fun fact time!  That line was actually improvised by Harrison Ford, it was never on the script.  George Lucas liked it so much that he decided to keep it in the movie.  Anyway, moving on to Return of the Jedi, Han is still frozen in carbonite.  But Leia shows how much she cares about him when she risks her life on Tatooine to save him.  Dressed as a Bounty Hunter, she goes to Jabba the Hutt’s palace where carbonite Han is being used as a decoration.  She gets Han out of the carbonite, and Han asks who it is that saved him (he was blind because of hyper sickness).  “Someone who loves you,” Leia replies.  Unfortunately, because Leia rescued Han, she was forced to be Jabba’s slave.  Obviously everything worked out and they were saved.  They even brought down the shields on the second Death Star together!  Soon after the event of Return of the Jedi, Han married Leia and they had Ben Solo.  Everything was going good until Ben turned to the Dark Side.  Leia and Han drifted apart.  As Han said, they had to deal with it their own ways.  In The Force Awakens, they meet back up, and their love is still there.  Sadly, Han is killed by his own son in this movie.  That’s one thing about Star Wars love stories; they usually don’t have a happy ending.

Han and Leia make a pretty awesome couple, but here’s another favorite of mine…

Another unlikely couple!  Luke Skywalker is polite and calm, a real Jedi hero.  And Mara?  Ha!  She’s the queen of sarcasm and speaks her mind, not at all concerned about who she might offend.  They were the last two people I thought would get married.  But it happened, and I can’t say that I’m not happy with it!  This love story may be non-canon, but it is still a story that should be known to any Star Wars fan.

Luke first met Mara in the the first of Timothy Zahn’s Thrawn Trilogy, Heir to the Empire.  A little explanation, Mara used to be the Emperor’s Hand, one of the highest ranks in the Empire.  She carried out all the personal tasks for the Emperor himself.  The Emperor’s last command to her was to kill Luke Skywalker.  That command has haunted her ever since the Emperor’s death.  So Mara wanted no friendship with Luke.  She only wished to kill him.  Throughout the books, Mara grows closer to Luke and finds that he’s actually not that bad of a guy.  In The Last Command, she helped Luke take down the Dark Jedi Joruus C’boath.  In this battle, she also killed Luke’s clone, ending the haunting command.  Luke gave Mara his father’s lightsaber and hoped that she would become a better Jedi.  In the book Vision of the Future, Luke and Mara went on mission to infiltrate an Empire of the Hand fortress.  As seen in the picture above, they became trapped and it seemed as though they were going to drown.  Right then Luke asked her is she would marry him.  “You mean if we get out of here?” She asked.  “I mean regardless,” Luke replies.  Mara accepted his proposal, giving Luke motivation to escape.  Fortunately, they were able to and they were married soon after.  Unfortunately, during the Yuuzahan Vong War, Mara was infected with deadly coomb spores.  Because of how strong in the force Mara was, she was able to resist it’s affects.  But the disease prevented her from having children.  Eventually, Han Solo was able to find a treatment for her.  A  little while after that, she was able to have their son, Ben Skywalker.  But like I said, Star Wars love stories don’t have happy endings.  Thirteen years after Ben was born, Mara and Luke began to suspect that their nephew, Jacen Solo, was turning to the Dark Side.  Mara was going to confront Jacen about this, but their meet ended in her death.  Jacen murdered his aunt in cold blood.  This was felt through the force by her husband and son.

Mara and Luke’s relationship went through a ton of trials, but they always stuck together.  And last but not least, it’s my favorite Star Wars love story… 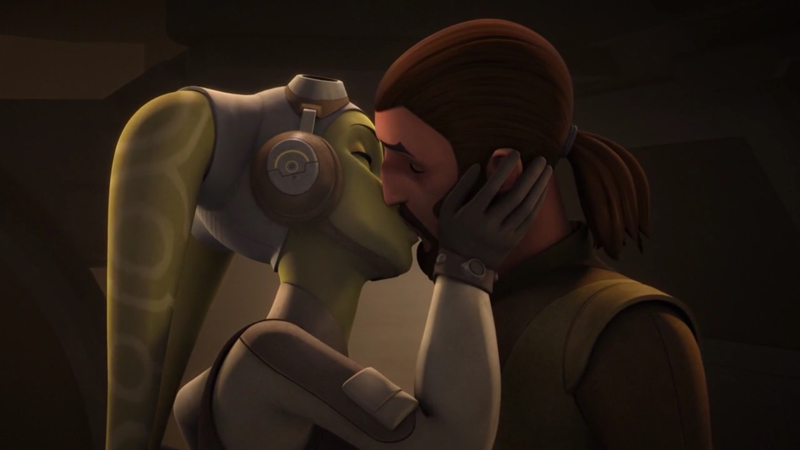 Star Wars Rebels introduced us to two amazing characters, the fallen Jedi, Kanan Jarrus, and the amazing Twi’lek pilot, Hera Syndulla.  People have been dying for them to be official ever since episode one, and back in November it finally happened!  These two encourage each other, always have each other’s backs, and know when to give each other some space.  They are definitely my favorite!

Kanan first met Hera in the amazing book A New Dawn (for real, I’ve read it five times already!) on Gorse, a planet trapped in an eternal night.  She was eighteen, he was twenty-one.  Kanan was on the run from his past, trying to conceal the fact that he was one of the only remaining Jedi from the Empire.  Hera was on a mission to find out what Denetrius Vidian, one of the Empire’s top guys, was doing on Gorse.  Kanan wanted nothing to do with being a rebel, but he was very much attracted to Hera.  Using this, Hera was able to manipulate Kanan to help her, and he did.  Throughout the book, the two of them got closer.  Kanan even chose to share his secret identity with Hera when he saved her life by using the force.  When Vidian was destroyed, Hera recruited Kanan as a part of her crew.  Not much is known about their time together before anyone else joined the crew, except for they spent some time on the planet Rion.  In Star Wars Rebels, they are shown as the parent figures to Zeb, Sabine, and Ezra.  Hera even sometimes refers to Kanan as “love” or “dear”.  When Kanan is captured by the Empire in the season one episode “Call to Action”, Hera is told by Fulcrum (Ahsoka Tano) that they shouldn’t risk saving him.  Hera regretfully agrees.  Of course, the rest of the crew are able to find out where and how they can get Kanan out of the Empire’s clutches, and Hera decides to go along with it.  In the season 2 episode “Mystery at Chopper Base”, it became clear that they really did love each other.  Kanan was about to leave for Malachor, and Hera was scared to see him go, fearing he wouldn’t come back.  Kanan promises that they’ll see each other again.  Whenever I watch a show or something and a character says they promise something, I’m always like, “No, don’t say that!”  Because the promise is rarely fulfilled.  Yeah, Kanan came back from Malachor, but he had been blinded by Darth Maul.  In season three, it appeared that they had grown apart.  After Kanan learned to “see” through the force, he came back to the Rebellion, and to Hera.  Then the final season of Rebels came along and gave us what we’ve so *cough* impatiently *cough* been waiting for; that on-screen kiss.  While this scene, pictured above, was a little forced in there, I believe that it was with good reason.  That was going to be the last time they saw each other for a long time.  Hera was captured by Rukh in the mid-season finale episode “Rebel Assualt”.   When Star Wars Rebels returns this Monday, Kanan and the others will go on a daring rescue mission to get Hera out of Lothal’s capital city, and I fear this may be Kanan’s last mission.

So there they are!  What are your favorite Star Wars love stories?  I’d really like to know! Also, I want to know your opinion, Rey and Kylo Ren, or Rey and Poe Dameron?  Let me know in the comments below!  I hope God blessed your Valentine’s Day and you were around all of the people you love!

One thought on “Star Wars and Valentine’s Day”