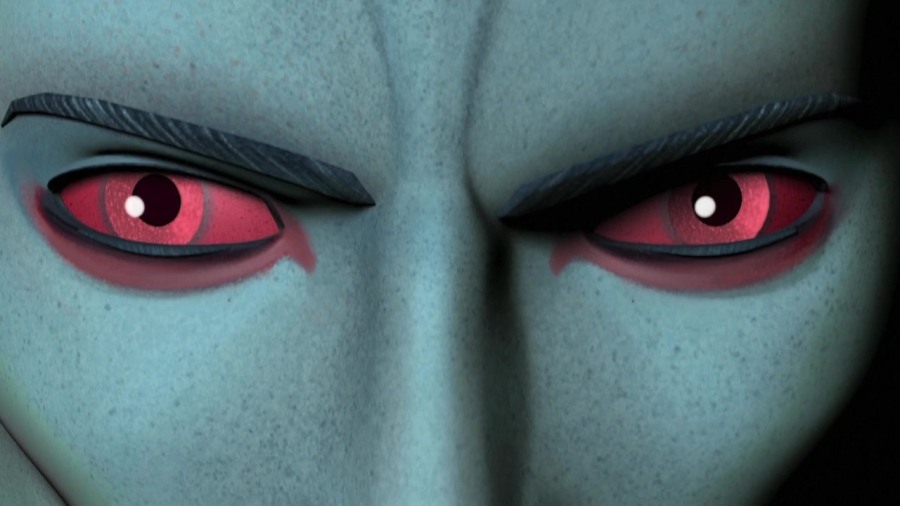 Grand Admiral Thrawn.  Just saying the name sends chills up my back.  I first learned of the blue-skinned Chiss back when I read Timothy Zahn’s Thrawn Trilogy, and I was immediately enraptured by the art loving Imperial.  Who is this guy?  I wondered.  Where did he come from?  As I got further on in the book, I knew Thrawn was a villain for the heroes to fear.  He keeps his calm in rough situations and only once have I ever seen him lose his temper (see the Star Wars Rebels episode “Hera’s Heroes”).  He’s highly intelligent, making it nearly impossible to defeat him.  Not even Hera Syndulla, who is also a skilled leader, can outsmart him.

Hopefully you have read Timothy Zahn’s Star Wars: Thrawn, which you can read my review for right here at Old Jho’s, because that book is amazing!  I’m about to talk about it, so if you had the misfortune of not reading it, turn back now; there will be small spoilers.  Anyway, the book showed a side of Thrawn that I’ve never seen before.  The only Thrawn I ever knew was one that was cold, ready to crush his enemies.  But he wasn’t always like that.  The book showed that he had a heart.  He was always going to do what needed to be done for the Empire, but he was kind at the same time.  Obviously, his time with the Empire changed him, as his personality is different in Rebels than it is in the book.

Thrawn came into the Empire barely able to speak Basic (English).  Luckily, he made fast friends with Eli Vanto, and Imperial cadet, who was able to teach the language to him.  But there was a problem for the two of them.  Let me explain something about the Empire.  You’ve seen the Rebellion.  All kinds of creatures join rebel cause, but in the Empire, you might notice that every one is a human.  The Empire has little tolerance of aliens in their ranks.  Eli may be human, but he isn’t a human from the Core Worlds (Coruscant, Alderaan, etc., he’s from Wild Space.  Everyone in the Empire appears to speak with Core (British) accents.  Eli spoke with a heavy country accent.  This means that everyone in the Empire looked down on Eli and Thrawn.  Eli even looked down on Thrawn sometimes, saying that he could never be successful in the Empire.  Thrawn proved them all wrong.  No one had ever gotten to Grand Admiral so fast before.

Thrawn is a villain that I love, but I’m also terrified of of him at the same time.  Every time I think Thrawn couldn’t surprise me anymore, he ends up doing just that.  And every time, he gets more frightening.  On moment that literally had me yelling at the book was only a small detail that I almost overlooked.  At the beginning of the book, Thrawn and Eli are attacked by some hateful cadets.  When asked what punishment these cadets should have, Thrawn simply wished for them to be transferred to Skystrike Academy, since they apparently showed skills worthy of a pilot when they fought.  Many chapters later, near the end, Thrawn and Eli meet up with a very skilled pilot.  Guess what?  That pilot was the same cadet that had attacked them years before!  Thrawn knew he would become one of the best pilots in the Empire!  There were many other times that things like this happened, but for some, it is best if you read about them yourself.

Star Wars Rebels’ last six episodes will be airing in just a few short weeks, and then the show will end.  I am very interested to see what will happen to Thrawn.  Back in season three, the Bendu told Thrawn, “I see your defeat, like many arms surrounding you in a cold embrace.”  What could this possibly mean?  Defeat isn’t exactly something that Thrawn experiences a whole lot.  I really don’t want Thrawn to be killed off, but I might settle for a small defeat!  I have a feeling that Thrawn might just go back to the Outer Rim territories where he used to be.

Star Wars: Thrawn will be getting a sequel, but it was unfortunately delayed from June 26, to July 24, 2018.  The sequel, Thrawn: Alliances, will have the Grand Admiral team up with none other than Darth Vader!  I am beyond excited for this book!  I am looking forward to how their team-up goes!  Thrawn will also be getting his own comic book series, releasing on February 7.

Thrawn’ story is the ultimate success story.  The people of the Empire thought that Thrawn would never amount to anything, but he quickly proved them wrong.  This is why Thrawn is my favorite villains.  Now all Thrawn has to do now is survive Star Wars Rebels!  What do you think about Grand Admiral Thrawn?  I would love to know who your all time favorite villain is as well!  Let me know in the comments!