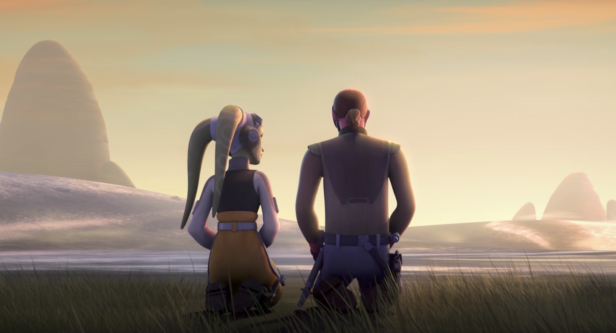 Let the countdown until Star Wars Rebels season 4 begin!  Yesterday afternoon a second trailer and a release date was revealed for the final season of the animated TV series and we have a lot to talk about with that trailer.  That trailer was absolutely incredible.  You can view the trailer below as well as in my post, Star Wars: Rebels BREAKING NEWS…

The trailer opens with a damaged Lothal city on the horizon and we here the rebels frantically calling each other’s names.  Already off to a bad start, aren’t we?  Ezra wakes up terrified, alone in the middle of nowhere on Lothal.  Next, we see cave drawings of people and giant wolves as Ezra says his rhyme from the season one episode Path of the Jedi, “Loth-Rat, Loth-Cat, Loth-Wolf run, pick a path and all is done.”  I don’t know why he might be saying this; perhaps he is going through the Lothal temple once again?  Then, We actually see a Loth-Wolf on screen for the first time, and these things are amazing. There is also a white Loth-Cat standing on top of the wolf.

Next we go to Mandalore and see that they’re in bad shape.  The Empire is trying to get complete control of the planet.  We see the mandalorians, including Fenn Rau, battle AT-ST Walkers.  Hera asks what the status is of the Imperial occupation via hologram.  Kanan replies, “Mandalore is under complete lockdown….War is raging”  Next we get a look at a brand new walker, and it looks like it’s going to cause problems for the rebels.  The walker proceeds to disintegrate two Mandalorians, leaving nothing but their armor behind.  We then see Bo-Katan holding up the Dark Saber with many Mandalorians bowing down to her.  She tells Sabine that it’s time for her to prove her loyalty, not just to her family, but to all of Mandalore.  We see Mandalorians standing together looking at something, Sabine’s brother, Tristan Wren, is among them.  In the next few scenes we see Sabine hold up the Dark Saber, take out a stormtrooper, and blow up a AT-ST.

Then we go back to Lothal to see that the Imperial presence is worse than ever before.  Sabine, Bo-Katan, Ezra, and Fenn Rau stand around looking at something.  Another scene has the rebels watching what looks like a hanger bay.  Then we see Thrawn and Pryce flanked by Death Troopers.  Saw Gerrera tell Mon Mothma, “If you continue to allow this war to be fought on the Empire’s terms, you are going to lose!”  We see two Tie Bombers blowing up stuff on Lothal, a Y-wing blow up at the Yavin 4 base, and another explosion knock Ezra, Chopper, and Ursa Wren off their feet.  A civilian gets down behind them.  Mon Mothma tells Ezra that they are not ready for open war.  We get a look at two Death Troopers with guns ready to fire.  Another look at Lothal shows us that the planet is not doing so hot, and we see Visago’s ship.  Visago was last seen in the season two episode Brother’s of the Broken Horn.  Ezra asks about his home world and says that they promised his people support.  In the next few scenes we see the Ghost flying around, Sabine and Ezra freefalling, Sabine take down a droid, Zeb in a strange outfit, Hera giving Mon Mothma this box looking thing, and Sabine, Ezra, and someone else I can’t make out looking at this weird glowing thing that is probably a giant Kyber crystal.  I apologize because Saw Gerrera says something but I can’t quite make out what it is.  Anyway, in the next few scenes we see Ezra blocking electricity with his lightsaber, a U-wing blow up an Imperial Freighter and a very large satellite dish, Saw and Edrio Two Tubes sitting in a turret, and a good look at Thrawn’s TIE Defender.  We see Thrawn having a conversation with Grand Moff Tarkin on a hologram.  Tarkin tells Thrawn that his TIE Defender is at risk.  “Krennic has been quite persuasive about his own project…StarDust.”  And look at that!  A Krennic name drop and the Death Star codename all in one sentence!  We see a U-wing fly by some spherical objects, Sabine and some other mandalorian getting electrocuted, a Star Destroyer blow up, the Ghost landing at Yavin base, and all of the rebels, including Agent Kallus, Mon Mothma, General Dodonna, Rex, a hologram of Bail Organa, standing around a hologram of a that large satellite dish from before.  Bail says, “What about the blockade, and Admiral Thrawn?”  We see the Ghost flying around the atmosphere of a planet I have never seen before and Dodonna says, “Are you confident your ship can get in and out undetected?”  Hera replies with, “We don’t call it the “Ghost” for nothing.”  Zeb shoots a TIE and shows his excitement in doing so and we see Kanan, Hera and Zeb sitting in the Ghost as they go into hyperspace. Next we see Grand Admiral Thrawn sitting in his office talking to his agent, Rukh, over a holocall and he tells him to capture Hera.  “It will be done,” Rukh replied.  In the next scenes we see Rukh and Hera aggressively fighting each other.

Going back to the wolves, Ezra and Kanan are watching the wolves run by and we hear their chilling howl.  In the next few scenes, we see Ezra cautiously walking past two mean looking wolves, more wolves, Ezra walking towards something with a blue glow in his eyes, Kanan surrounded by wolves, Ezra grabbing for his lightsaber, and Ezra holding his lightsaber up.  Kanan says, “Ezra, it’s not whether or not we fight…”  Ezra finishes, “It’s how we choose to fight that matters…I know Kanan.  But maybe we’re choosing the wrong way.”  Next we see the X-wings battling TIE Fighters!  How exciting! We see Chopper with a new paint job stunning a stormtrooper, Rukh, Ezra and Kanan battling an unseen enemy in a strange place.  Kanan asks Hera when she’s going to feel like she’s done enough for the Rebellion, she replied that she really hasn’t thought about it.  “So I guess you never really thought about us?”  Kanan asks.  In the next shots we see Ezra with his lightsaber block incoming fire, Ezra bringing down a small ship, Ships flying around Stormtroopers tell Kanan not to move, to which he replies with, “Oh, I’m moving!”  Next we see Kanan prove that even a blind guy can mess you up when he takes out a few troopers on the top of a moving Imperial vehicle with help from Fenn Rau. Ezra disarms another trooper, Hera shoots at somebody, A TIE crashes into a Star Destroyer, Kanan being tortured with a few bystanders, including Visago, watching in terror.  Ezra blows up a TIE, Zeb fights with someone, a X-wing blows up, Sabine saves Ezra from falling, Chopper slaps a stormtrooper, and Ezra fights with a Death trooper. The rebels are seen fighting together in strange outfits, in two different scenes Kanan and Ezra are once again battling troopers.  During these scenes Hera says, “We will not stand down, we will not be broken by fear.  We are strong, united by our courage.  Now it’s our time.”

Next we see Kanan and Hera standing in a room alone.  Kanan, wearing these cool sunglasses, says that he wishes he could see her.  Hera removes the sunglasses and says, “You could always see me.”  In another scene we see them sitting together on Lothal.  The next few scenes are a blur, but as far as I can tell it’s Kanan trying not to run over a wolf with a speeder bike, X-wings and TIE’s fighting again, and Hera pulling up in a ship.  The final scene has Kanan, Sabine, Ezra, and Zeb watching something falling down on Lothal city.  Ezra says, “All the paths are coming together, right?”   Kanan replies with, “I’m just not sure we’re going to like where they lead.”

So that’s everything!  I will write another post detailing some of the highlights from this trailer soon.  What did you think about the trailer?  Let me know in the comments!