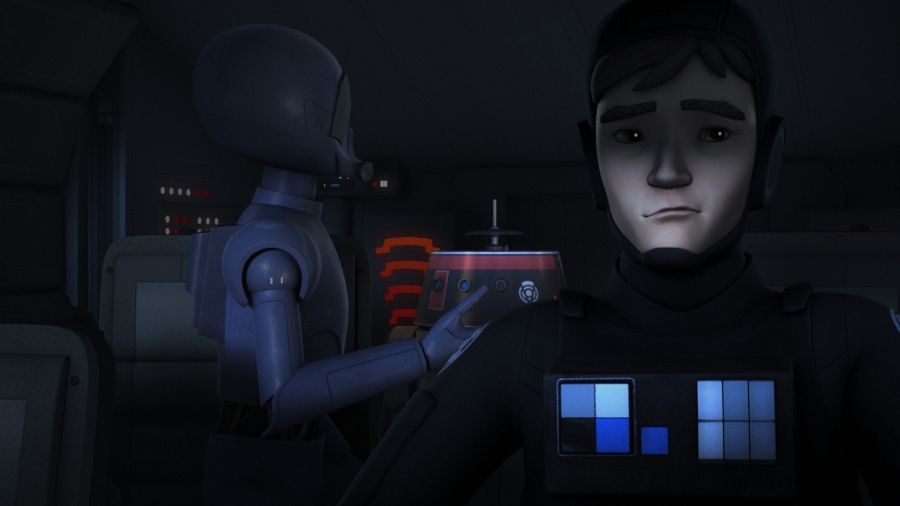 Last Saturday’s episode of Star Wars Rebels was, quite, well, interesting.  It might have been another filler episode, but it was probably one of the funniest I’ve ever seen.  This was also the second episode for Kanan to not be there for the entire thing, which is kind of upsetting, but he will definitely be back next time.  Anyway, let’s get to recapping Double Agent Droid.  (Major Spoilers Ahead!)…

The episode starts out with Wedge Antilles, Chopper, and AP-5 going on an undercover mission to acquire Imperial Codes that they need for Phoenix Squadron’s attack on Lothal. A5 is surprised that Hera picked Wedge for the mission, since his “Grasp of protocol is sorely lacking.”  Next, A5 and Chopper get into an argument about who is the better droid.  A5 says that he can be a better rebel spy than Chopper.  Chopper doesn’t think so.  A5 and Chopper continue their argument.  “Now I know why I got this mission,” Wedge says to himself.  “Because no one else wanted it.”   The three arrive at Killun Station and fool the Imperials into letting them into the base.  There’s one problem though, there is an entire ship of intel officers watching the A5 and Chopper, and they know something’s up.  They wait to see what they will do.  A5 is fed up with Chopper and goes to get the codes on his own.

The Intel Officers Are Onto Chopper

The officers find that Chopper is not an Imperial droid, and is actually the same droid that Grand Admiral Thrawn had told them about.  The nameless officer in charge says that they will not inform the ISB until he has want he wants from the droid.  Meanwhile, A5 find the central computer where he can get the codes, but is approached by a female droid, PZ-7. She is surprised to see A5, and says that she didn’t know two droids were sent to the same level.  “Oh, well, it is unfortunate, but I must report that you have been reassigned to the cargo platform,” says A5. “I am your replacement.”  P7 replies that she understands and heads for the cargo platform.  A5 continues on and successfully downloads the codes.  Chopper is busy trying to gain access to the network terminal.  The intel officers see this and capture him by sending electric shocks through the terminal.  Now, the controller thinks that by using Chopper against the Rebels, he can find the location of their base.  With some effort, the controller reprograms Chopper and takes control of him.

AP-5 returns to get Chopper and shows him that he has the codes (which whatever Chopper sees, the intel officers see, so they know that A5 stole the codes now.)  A5 return to the ship where Wedge is waiting.  “Where’s Chopper?” Wedge asks.  Chopper rolls up and apologizes for taking so long.  Wedge and A5 look at each other, surprised that Chopper apologized for something.  Next, Chopper tells A5 that he is, in fact, the better leader.  “Well then, this should be a painless ride home,” says Wedge.  But A5 is suspicious.  Chopper tells A5 that he is in standby mode,  which A5 is even more surprised at, because he is never in standby mode.  Hera contacts the three to get an update on the mission.  Wedge tells her that the droids did all the work.  A5 corrects him by saying that only one droid did all the work; himself.  Hera asks when they will arrive at the rendezvous point.  Wedge says within an hour.  Wedge turns off the hologram and turns to A5.  “What is wrong with you?” He asks A5 angrily.  Before A5 can answer, Chopper brings Wedge a carton of blue milk.  Wedge thanks him.  “Where was this attitude earlier?” He asks.  A5 says that Chopper’s new attitude feel insincere, but Wedge doesn’t care.  The controller watches A5 complain about Chopper, and says that the inventory droid should be appeased.

No One Will Listen To AP-5

Wedge tells A5 that he should stop his childish games with Chopper, but A5 tells him that it’s not a game anymore.  He thinks that Chopper has been compromised.  Wedge replied that he’s just paranoid and should get his sensors checked.  Wedge leaves to use the refresher (the Star Wars name for a bathroom), which A5 hilariously follows him there to tell him that he saw Chopper plugged up to a terminol back at Killun Station and was strangely silent.  A5 also heard him using Imperial terms.  “I don’t have time for conspiracy theories right now, I really have to use the refresher,” says Wedge.  He pushes A5 out of the room and shuts the door.  Chopper is watching them, which mean the officers are too.  The controller is pleased that no one will listen to A5 and says that it is only a matter of time before Chopper leads them to the rebel base.  The three get back to the Ghost, where Ezra and Zeb are playing a game of Dejark and Hera is waiting.  A5 gives Hera the codes saying that he saved them from Chopper.  Wedge complains about A5 and Chopper playing spy games the whole time, which Ezra and Zeb find amusing.  A5 insists that it isn’t a game and that something is wrong with Chopper.  “By the way, where is he?” Ezra wonders.  A5 pleads that they must listen to him, but Hera pushes him aside and goes to look for Chopper.  She finds him in the cockpit looking through their hyperspace logs.  Chopper tells Hera that he had files wiped on Killun, but Hera tells him that is he remembers that she is always the one to wipe his data.  She tells Chopper he needs a recharge.  Hera goes to see the other and tells them that she thinks something is wrong with Chopper.  “As I have pointed out repeatedly,” says A5.  Wedge mentions that he was being curiously nice to him to him,  “Wow,” Zeb says.  “That’s not curious, that’s creepy.”  Hera says they should run a diagnostic on Chopper, but at that instant, The Ghost comes out of hyperspace.

Hera calls Chopper and asks why they had dropped out of hyperspace.  Chopper replied that there was a malfunction in the engines.  When the rebels go to check it out though, Chopper traps them in the cargo bay.  “I hate to say I told you so,” says A5.  Hera promises that they will listen to him next time.  Chopper takes back the Imperial codes that A5 had stolen earlier and installs a data spike into the Ghost’s computer to download the rebel base’s coordinates.  The controller says that all they need now is a little time and no interference.  Zeb tries to pry to cockpit door open with no success.  The controller says that they have no need of prisoner and to open the cargo bay door. The door opens and the rebels hold on to whatever they can find to prevent being sucked out into space.  With some effort, Hera shuts the door.  The controller says that their survival is only temporary.  Hera finds out that the intel officers have compromised Chopper and is downloading the location of their base.  Ezra says that is they don’t get out of their fast, then it’s “Bye bye Phoenix Squadron.  Hera says that they can override the hatch controls, and that there is an access panel that;s on the outside of the ship.  Ezra reminds them that they don’t have space suits.  Hera says that AP-5 can go, but A5 says he’s not volunteering.  “Yes you are,” says Hera.  They don’t have much time left and hurry to get A5 outside of the Ghost.  Chopper sees A5 and goes to confront him.  While the controller is looking through all the rebel’s data, A5 frees the rebels and faces Chopper.  Chopper pushes A5 of the ship and leaves him to float away.  He returns to the data spike only to be electrocuted by Zeb.  “I’ve been wanting to do that for a long time,” Zeb jokes.  He takes the spike out preventing the intel officers from finding their base.

A word of advice?  Don’t make Hera mad.  “If they’re gonna’ to mess with my droid, they’re gonna’ pay for it,” she says.  “Uh Oh, Hera’s mad,” says Ezra.  Hera says that whoever is responsible for what was happening to Chopper had to have a strong single to control him from such a distance.  She says that she will reverse the feed on them and send them more power than they expect.  Hera calls the controller and tells him to keep his hands of her droid.  She sends the signal through Chopper.  The intel officers try to disconnect from Chopper, but it is too late, their ship explodes into nothing.  The surge leaves Chopper unresponsive.  Hera tries to get him to wake up.  “Come back to me buddy,” says Hera.  Chopper slowly activates.  The rebels are relieved.  “I can’t believe I’m saying this,” says Zeb.  “But I’m glad you’re okay.”

The team remembers A5 and what he had done.  Ezra praises the droid before wondering where he went.  Meanwhile, A5 is drifting out in space.  “I should be frightened,” he says.  But I’m strangely calm.”  A flock of baby Neebrays fly around him as A5 remarks that it is beautiful in space.  He loves the idea of of being alone so much, that he sings a little song about it.  Unfortunately for him, the Ghost crew find and scoop him up into the cargo bay. The crew praise A5 for his actions before A5 accuses Chopper of trying to scrap him.  Chopper apologizes making A5 believe that he is still compromised.  At that remark, Chopper hits both A5 and Wedge’s legs, and tells them that he was saying that he was sorry for being nice to them.  Wedge says that he is done with droids and that from then on he was going to fly solo.  Wedge and A5 go on to chase Chopper around the cargo bay.

When I sat down to watch this episode, I did not expect to see droids singing and barging into occupied bathrooms.  But hey, it was just the comic relief that rebels needs before they plunge into the last few episodes.  I am really starting wonder where Kanan went though, I’m sure that he would have had some funny remark to say about their situation.  But now is the time to get the filler episodes out of the way and get to real deals.  At the end of this episode we got to see a trailer, which I have posted on my blog, for “Twin Suns”.  I can not wait at all for the rematch of the century that is sure to come this Saturday.

– I’m still trying to figure out why Ezra couldn’t just use his lightsaber to cut the door open when they were trapped.  I guess that Hera didn’t want him to break her ship, but their entire base was at stake.

– The Neebrays were first seen in the Clone Wars.